The beautifully illustrated dog artwork and irresistible tale of the ‘Lonely Dog’ – an orphan hound growing up in Alveridgea, where cats and dogs live alongside each other, but on very different sides of the tracks. 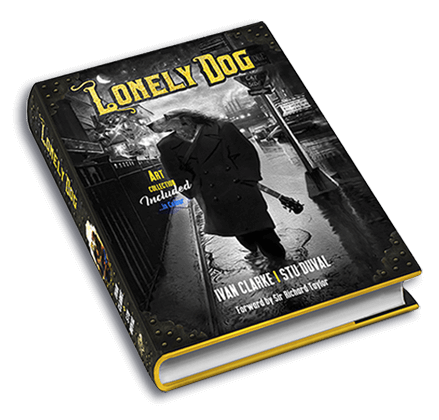 ‘Lonely Dog is a beautiful book in every sense. Ivan Clarke’s illustrations bring the story, eloquently co-written by his longtime friend, Stu Duval, to life; and render the book a genuine treasure, a work of art as much as literature…’

‘In the manner of J.K. Rowling, or Charles Dickens a century earlier, or the Grimm Brothers a century before that, New Zealand writers and artists, Ivan Clarke and Stu Duval, have invented a hero…’

‘This is an outstanding novel and will become as legendary as Lonely Dog himself. Brilliantly illustrated by creator Ivan Clarke and told by master storyteller Stu Duval whose command of language will have you laughing out loud. His imagery and metaphor are brilliant…’ 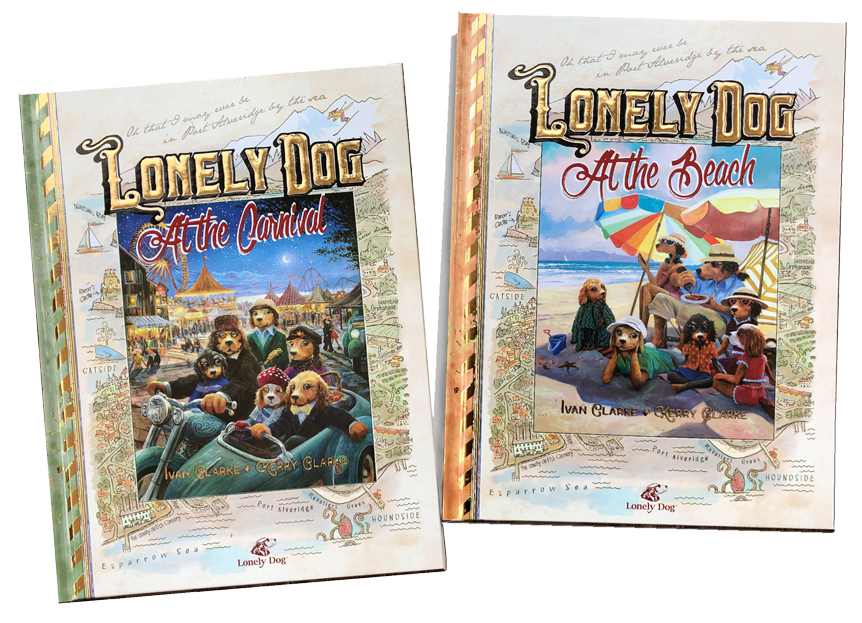 These are heirloom books that come beautifully crafted. Hard-back, embellished with gold embossing and illustrated in the age-old art of ink and watercolour wash by Ivan Clarke. Written in rhyme that will captivate ages 3 over.

This exciting Audiobook version of the groundbreaking hardback novel, which includes over 20 original and compelling songs, is the fascinating tale of the ‘Lonely Dog’ – an orphan hound growing up in Alveridgea, where cats and dogs live alongside each other, but on quite different sides of the tracks. A fable of finding purpose amidst social division, it is highly relevant to today’s world.

Lonely Dog is a story of music and passion, love and loss, defeat and victory. But beneath its action packed surface lies a tale that is nuanced with compelling themes, multiple layers of intrigue, and quite a few surprises.

This colorful, whimsical, and moving saga follows the journey of Arthur Snout, nicknamed “Lonely Dog” in his youth. Abandoned on the cold steps of a Houndside orphanage, the small un-houndish pup grows up on the hard scrabble, working class side of town, where motorbike gangs mingle with milkmen and everything is faded, including dreams.

Bullied and misunderstood, Lonely is hounded from town to town and ultimately becomes a refugee in his own country. With a price on his head, all that this shy reluctant hero cares about is the guitar on his back and his one true love. But fate has a much more urgent and vital plan for his life.

Some call him a troubadour, others a troublemaker. It is said that Lonely Dog’s songs became legends long before he did, but he caught up, and the whole world listened.

This is his story.

Listen to the audio book sample

Where to buy the audiobook