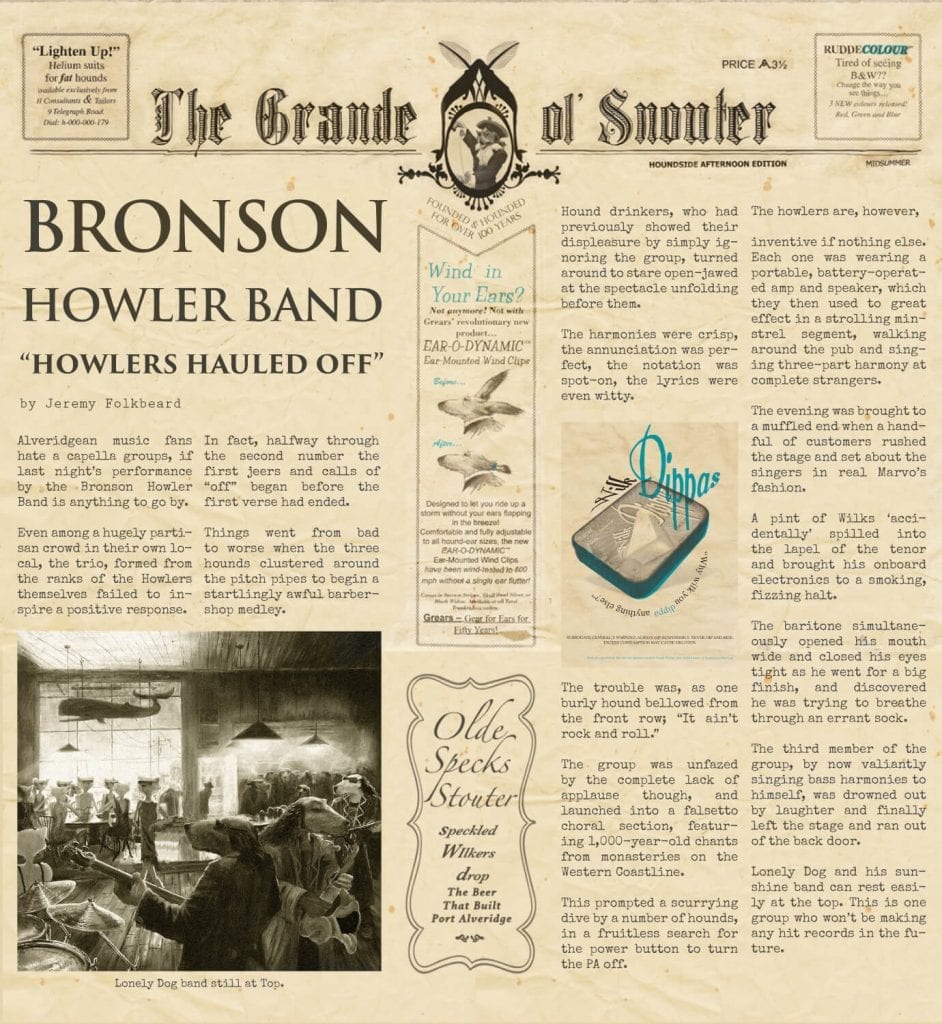 Alveridgean music fans hate a capella groups, if last night’s performance by the Bronson Howler Band is anything to go by.

Even among a hugely partisan crowd in their own local, the trio, formed from the ranks of the Howlers themselves failed to inspire a positive response. In fact, halfway through the second number the first jeers and calls of “off” began before the first verse had ended.

Things went from bad to worse when the three hounds clustered around the pitch pipes to begin a startlingly awful barbershop medley. Hound drinkers, who had previously showed their displeasure by simply ignoring the group, turned around to stare open-jawed at the spectacle unfolding before them.

The harmonies were crisp, the annunciation was perfect, the notation was spot-on, the lyrics were even witty. The trouble was, as one burly hound bellowed from the front row; “It ain’t rock and roll.” The group was unfazed by the complete lack of applause though, and launched into a falsetto choral section, featuring 1,000-year-old chants from monasteries on the Western Coastline.

This prompted a scurrying dive by a number of hounds, in a fruitless search for the power button to turn the PA off. The howlers are, however, inventive if nothing else. Each one was wearing a portable, battery-operated amp and speaker, which they then used to great effect in a strolling minstrel segment, walking around the pub and singing three-part harmony at complete strangers.

The evening was brought to a muffled end when a handful of customers rushed the stage and set about the singers in real Marvo’s fashion. A pint of Wilks ‘accidentally’ spilled into the lapel of the tenor and brought his onboard electronics to a smoking, fizzing halt.

The baritone simultaneously opened his mouth wide and closed his eyes tight as he went for a big finish, and discovered he was trying to breathe through an errant sock. The third member of the group, by now valiantly singing bass harmonies to himself, was drowned out by laughter and finally left the stage and ran out of the back door.

Lonely Dog and his sunshine band can rest easily at the top. This is one group who won’t be making any hit records in the future.