Inside the Sun Curry House 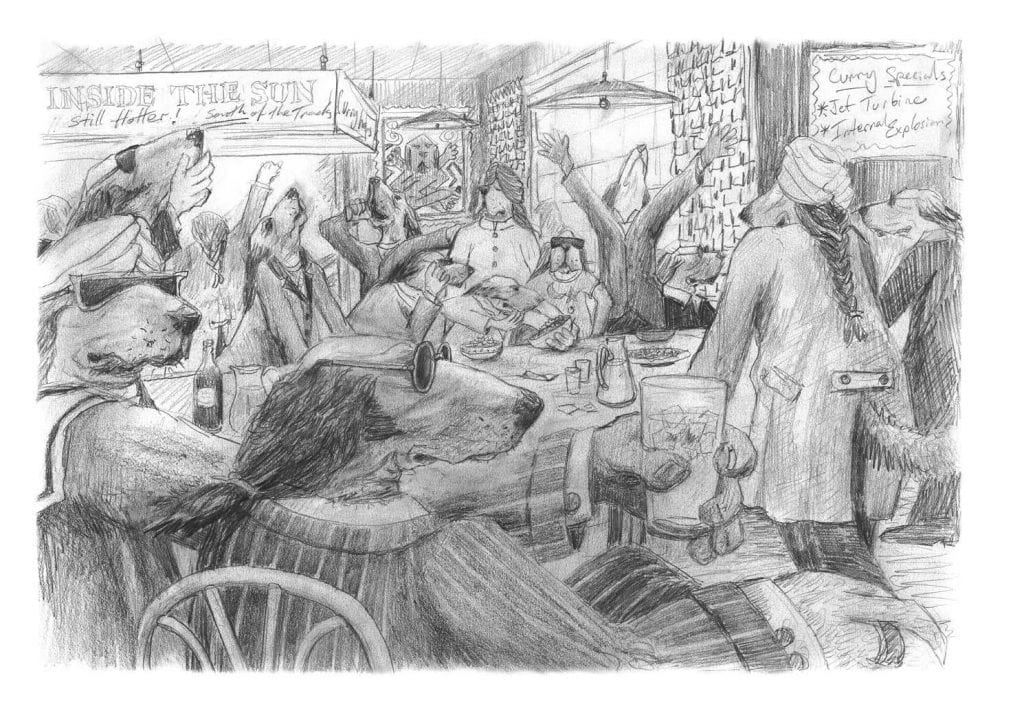 ‘What’s Ruddegan doing up here?’ he growled to himself. ‘Look at that smug smirk. Give me five minutes with him in this cell and I’d wipe the smile off his face!’

‘Can’t be done, Bronson.’ His cellmate was a broom-thin Howler named Jethro. ‘Even if you got Ruddegan in here, there ain’t room to swing a Cat!’

He collapsed onto his steel cot in laughter. Bronson didn’t laugh, just stared angrily after the Mayor. He’d managed to elude the Toms for more than two years after that night he’d left Lonely Dog with Toothless Bob in Blizzard Valley. Mostly he’d hidden out in Beaconsfield with the Baron. Then, a month ago, he’d gone to meet a little Houndette he was half in love with, Shardona, at Gnarling Point. He was ambushed. Fifty Toms, big and mean, had surrounded him and the ensuing brawl had been spectacular and desperate. Eventually the Toms had gotten the better of him. They chained and shackled the big Hound, beat him to a bloody pulp, then hauled him off to Fever Creek.

As the armored van bounced ‘Upriver’ over rutted roads, the manacles digging into his bloody flesh and his eye swelling like a rotten avocado, Bronson couldn’t shake one sickening thought: how had the Toms known he’d be at Gnarling Point? He hadn’t told the other Howlers, hadn’t told anyone. Only Shardona herself had known he was coming, and Bronson was certain she wouldn’t have betrayed him. The Baron had invited Bronson to dinner that night and, as always, had spent most of the evening reliving past glories and marshaling battalions of salt shakers and cutlery in ferocious battle. Bronson had finally slipped away, telling the old Hound he had a secret assignation with a pair of hot lips at Gnarling Point. The Baron had generously offered him a bottle of vintage Houndstooth Pinot for the date and wished him well. It had taken Bronson thirty minutes by bike from Beaconsfield to the Point – time enough for the Toms to prepare an attack if someone had phoned to alert them, someone who knew of his midnight rendezvous. And aside from the old Baron, the only other Hound at the dinner table that evening had been an old friend fallen on hard times. Rolph Flannegan.