An Interview with Rolph Flannegan 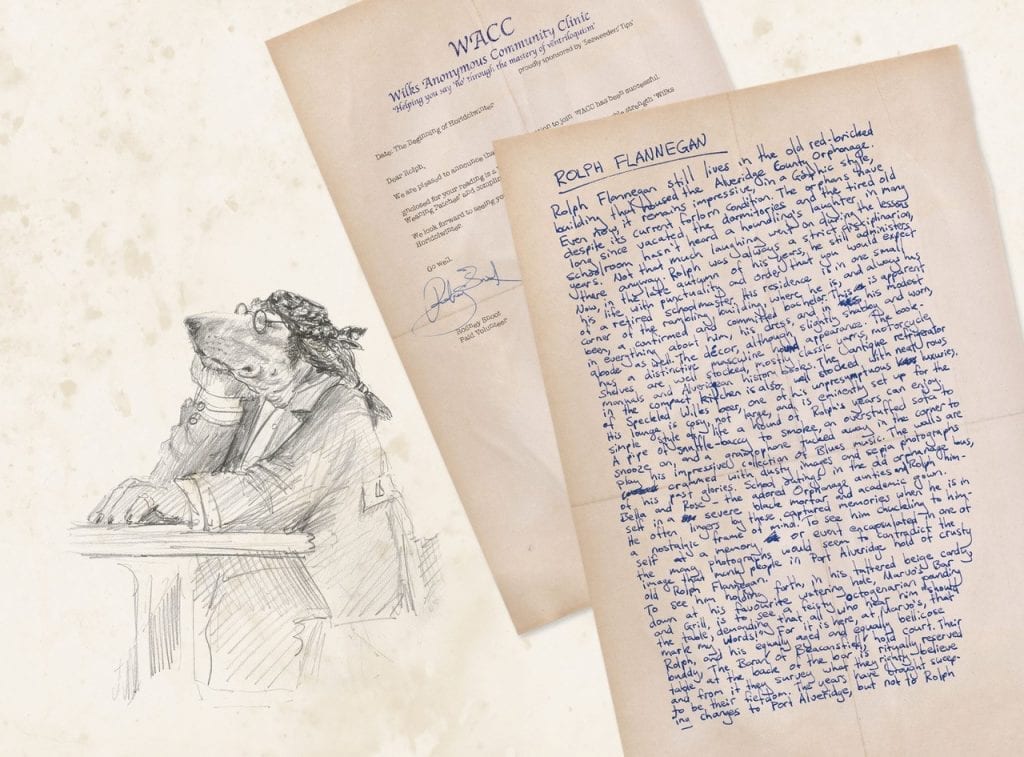 Rolph was always a strict disciplinarian. Even now, in the late autumn of his years, he still administers his life with the punctuality and order that you would expect of a retired schoolmaster. His residence is in one small corner of the rambling building, where he is and always has been a confirmed and committed bachelor. This is apparent in everything about him, his dress, and in his modest abode as well.  The décor, although slightly shabby and worn has a distinctive masculine hound appearance. The bookshelves are well stocked, mostly classic yarns, motorcycle manuals and Alveridgean history books.  The antique refrigerator in the compact kitchen is also well stocked with neat rows of Speckled Wilks beer, one of his unpresumptuous luxuries. His lounge is cozy, not large, and is eminently set up for the simple style of life a hound of Rolph’s years can enjoy. A pipe of bubble-baccy to smoke, an overstuffed sofa to snooze on, and a gramophone tucked away in the corner to play his impressive collection of Blues music. The walls are crammed with dusty images and sepia photographs of his past glories; school outings in the old orphanage bus, Bella and Rose, the adored Orphanage aunties, Rolph himself in a severe black mortar and academic gown.

He often lingers by these captured memories when he is in a nostalgic frame of mind. To see him chuckling to himself at a memory or event encapsulated in one of the many photographs would seem to contradict the image that many people in Port Alveridge hold of crusty old Rolph Flannegan.

To see him holding forth, in his tattered beige cardy, down at his favorite watering hole, Marvo’s Bar and Grill, is to see a feisty octogenarian pounding the table, demanding that all who hear him, “should mark my words!” For it is here, at Marvo’s, that Rolph, and his equally aged and equally bellicose  buddy, The Baron of Beaconsfield, hold court. Their table at the back of the bar is ritually reserved and from it they survey what they rightly believe to be their fiefdom. The years have brought sweeping changes to Port Alveridge, but not to Rolph Flannegan and those he considers privileged enough to share his table, and most evenings, his bile. This vitriol is mostly aimed at the new breed of cat that has flouted old Rolphs sensibilities and the generation that bore him.

He is at his best, snout thrust forward, eyes a sparkle, when he is remonstrating about the way things have changed, and what should be done to rectify them. The old headmaster in him never retired, just got a bit gray in the muzzle. His dire predictions and thumping oratory have earned him a begrudging respect from the older regulars at Marvo’s, although the younger hounds, in afros and flares, look upon him as a cranky reminder of their own unfortunate school days and the slightly barmy masters that caned and berated them.

But give him a few pints of Wilks and his mood will change, usually  corresponding directly to the number of hounds gathered around his table, and also to the number of empty beer jugs at his elbow, to tales of the orphanage and in particular his early influence in the life of Arthur Snout aka Lonely Dog.

He never tires of telling it, although the audience sometimes tires of hearing it. How, according to Rolph, he personally encouraged, nay, tutored the young Arthur Snout in the manly art of playing the 5 string Alveridgean Guitar. “His first chords where the ones I taught him! Now that’s an umbilical cord that can’t be broken! He plays guitar now exactly as I showed him then.”

Now guitar playing was, to be truthful, one of old Rolphs fortes. He could, and still does, pick a mean blues riff and his houndskiffle jams down on Revellers Green are still remembered. Yet this was not something that he wanted made public. In fact, all through his life, he had tried hard to conceal the other, opposite side, of his rather fusty personality. In short, he was a stern schoolmaster by day … and a free-spirited troubadour by night.

Carefully replacing his black mortar board for a red bandana, he would slip out of the orphanage and onto his beloved Houndster V2 Whizzer, guitar stowed in the sidecar, and burn a blackie down Tumbleton Ave to Revellers Green. There he’d hang-out with all the other wild free-spirited artistes, strumming and jamming into the warm summer nights beneath a huge tumbleroot tree. Then, when he had had his fill of music, and Wilks, he would somehow maneuver his Houndster back up Tumbleton Ave.

Once home he’d return to form and carefully wash and rinse his sweaty bandana and hang it to dry amongst the orphanage tea-towels in the hot-water cupboard. Thus his secret had been much like his bandana, hidden in the closet. Yet the door of that closet had been forced open by a little lonely hound with a passion for music that matched his own…

The patrons of Marvo’s have all gone home now, leaving the old headmaster to his beer dregs and his thoughts. Then, with just one lone bar-hound for an audience, Rolph Flannegan picks up his beloved guitar and begins to sing….

The sailor returned, from the sea he came back

Past the tumbled down wharfs, to his old timber shack

To his sweetheart who waited, the love of his life

To kiss her, to wed her, to start a new life…

Oh the sea is so cruel, and the wind cuts like a knife

And sweethearts and lovers they only cause strife

For only one thing is true and won’t part

A five string guitar and one broken heart.

The sailor he came home, but love left the same day

She’d given her heart to another they say

And all that was left was a dream and a scar

And a broken down heart and his faithful guitar…